Given the difficulties currently many developers have in Europe and the U.S., many investors are looking to Colombia as an interesting place to undertake large projects. 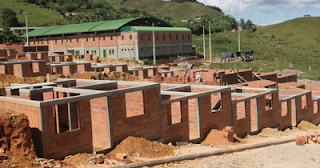 So it is considered by directors of the Real Estate Association of Bogota, who claim that to achieve a real entrance of foreign entrepreneurs in real estate sector, there are issues that the country should review.

One of these aspects has to do with the settings the Government should make to the Leases Act, which fell short trying to defend the right to ownership.

According to the President of the Association, Amparo Araujo, "there are important issues that deserve observation, such as restitution, which requires from the goverment more flexible and reliable regulations."


Also, the housing sector prompted the Government to regulate land use of certain urban areas, given the deficit that currently have the builders to undertake mainly social housing projects.

Another measure that will boost the sector has to do with the approval of the "second home law" ( An initiative to encourage foreign investment for retirees as is already done in Panama or Costa Rica), which will undoubtedly serve as a stimulus for big real estate players.

On the imminent arrival of foreign investment in Colombia, the Executive considers very lucky that factor, as long as those are productive capitals that seeks to improve profitability in the property market.

Between January and March this year, foreign investment in construction and real estate was $ 121 million dollars, when in the same period of 2010 was 65 million dollars.

La Lonja, which includes builders, real estate companies and appraisers, says there are already arriving to Colombia entrepreneurs who see a good destination for high returns and that's why international real estate investment trusts are already in the country developing attractive packages with return on net income and valuation of properties.


Mrs. Araujo, said that not in vain Colombia is becoming one of the countries of Latin America more attractive to invest in real estate.

She also states that from members of the guild there is confidence by the arrival of foreign capitals to the construction sector as long as they provide a constant flow of resources and not artificial investments.

"We are friends to encourage foreign investment in real estate, it is important for us, but we need productive capital for the country, because otherwise it would discourage the interest of some investors who want to make a firm commitment into Colombian real estate." said Araujo.


Such investment is undoubtedly the best chance to avert an affair so delicate like the housing deficit, because many foreign companies are seeing a big niche not only in large projects but also in social housing.


According to the Lonja de Bogotá, foreign investment in social housing (VIS-Vivienda de Interes Social) is certainly an option, but with clear rules and mechanisms that guarantee the investor there will be expeditious and transparent processes, because that has been a bottleneck for investment in real estate housing lower strata, because there are delays and ineffectiveness in the current legislation.

septiembre 19, 2008
Well it sounds overstated, but it’s true. The results was given according to the 2007 Coldwell Banker Home Price Comparison Index (HPCI). This annual “apples to apples” comparison of similar middle management homes finds that an average 2,200 square foot, 4 bedroom, 2 and a half bath home in Bogota costs an average price of US$140.100, making the city as one of the cheapest real estate market in the world, and one of the most attractive markets for foreign real estate investment . Serving as a “snapshot” study, the Coldwell Banker HPCI evaluates average home values for select 2,200 square foot single-family dwellings with four bedrooms, two and one-half baths, a family room (or equivalent) and a two-car garage in 394 markets across the United States, Puerto Rico, Canada and a sampling of 55 countries/territories outside of North America where Coldwell Banker has a presence. Dublin is the most expensive studied market outside of North America (prices converted to U.S. dollars as of
Leer más